I can't believe how long it's been since I posted!  Time is flying by and yet sometimes it feels like it stands still.  They boys are creeping up on two months and I believe they finally believe this is home. 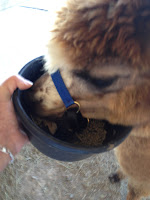 I hardly know where to start to catch up with all that has taken place in the alpaca world.  When I last left off I had just begun trying to get them where I could think about haltering them.  I had just received all of my tools and we were working in the catch pen.  Amazingly in just a week or so of working with them individually in the pen I was able to put their halters on them and began leading them a little bit.  I started with placing the halter in their feed bowl.  They would stick their nose through to get to the food.  At one point Sammy pulled his head out of bowl and halter was just hanging on nose (see two pictures) and it took a minute for him to shake it off. I'm sure when I go to my classes in Oregon in June I will learn that I wasn't doing it correctly, but at least we seem to be accepting each other's role and tolerating each other. 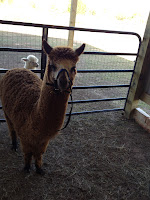 The more I was with them, the more they seemed willing to let me touch their heads, we haven't headed to any other part of the body yet, but them we had to make some changes.

But let's back track just slightly.  Their small fenced pasture had lost it's green!  They had it down to nubs, so in order to encourage them to be led with halter and lead I took them out into the large pasture where the grass was very green and lots of it!  Sammy was the first to go out and he ate to his hearts content and then we would walk back in to the catch pen.  I would remove the halter and let him out and then work with one of the others.

Now remember, they watch each other carefully.  So the entire time we were out and Sammy was eating, the other two were watching and trying to get to that grass.  Now I put their halter on add the lead and start out and they didn't want tot walk.  Finally Pancho figured it out and went out and ate, but Lefty wanted to part of it.

Then came the rain that flooded everything and changes in their stall and my catch pen and so we decided that we needed to let them out to eat, lead or not!  So on a Sunday afternoon, we released them to the big pasture and prayed they would come back in for pellets.  They did!  The next day I let them out again with just me at home and really prayed they would come back in for pellets and they did!  Now I go out open the gates, they go out and they come in on their own for water, shade and their dung pile!  They wander in and out like it's the natural thing to do, until evening and then they come in and I close and lock the gates, so they're in their smaller pasture and that seems to be just fine with them!  I honestly never imagined this could be so easy.

On the negative side, I haven't been working with them and their halters and must get back to that soon as we will be heading out on April 30 for shearing.  I don't know what to expect with shearing and don't really look forward to it, but we must do it or Texas heat would kill them and, of course, I am excited to see what their fiber is like.  Hope it's great, but time will tell.

I must say that this hasn't been an easy last three weeks.  Early after my last post I was ready to put them up for sale.  Their lack of trust of me and the frustration of working with them almost took it's toll.  Accepting that they are livestock and not domesticated animals has not been easy for me.  I've never had anything  but dogs and cats.  They are more like cats, but really not like either one.  It rains and they stand out in it or lie down in the mud and roll.  My mind says protect them!  Bring them  in, keep them dry.  They say let me be an alpaca!  My thoughts are not your thoughts, my ways are not your ways!  See any similarity there with us and God?

I have found many God lessons with these boys and they have assisted me in writing a recent devotion regarding trust in God (my part) and their trust in me!  I'm learning to say I trust you Lord and letting them go!  They are learning to trust me a little and draw a little closer!  But not unlike my walk with the Lord, they pull away and I wonder why, I'm sure just as He looks down at me and wonders why.  Makes no sense for either of us! 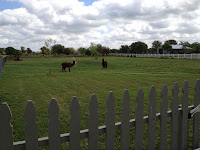 And so today, I sit here and watch them run in the pasture and it is a joyful run.  I watch them graze and thank God I have them, trusting that I will learn how to handle them and they will learn to trust me and we will live in harmony!  Believe me, no one wants that more than my sweet hubby who has been living with me on this roller coaster ride!

He surprised me with a new (old) trailer for them this week.  But more on trailers and fences later.  Got to get back to reality and get those pesky taxes done!