Closing out 2015 with the of the boys highlights! 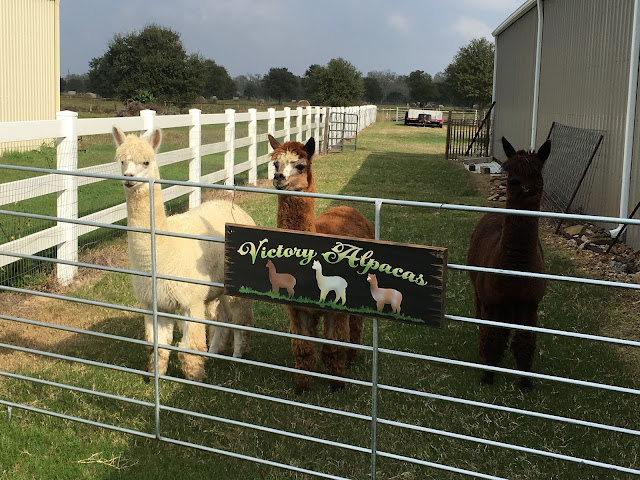 Closing out the year the boys got a sign for Christmas and they will have a very special gate from our back yard into their big field.  This was a surprise for me and them and I got to open it Christmas morning.  Bill did an amazing job getting the three painted to look like our three and we hung it on this fence so we could see it with the boys!

For some time we have talked about using a door and having a sign above it. We headed out the next day and found the perfect door to use as the gate. (See below) 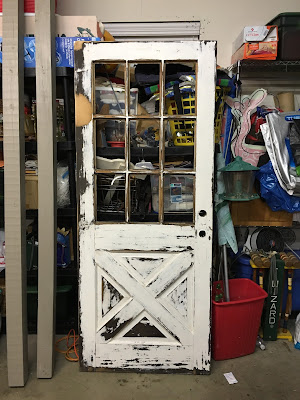 It has been lousy weather since Christmas, but we have gotten the frame work up and will have the gate operational within a week or so!  Watch for a post to proudly show off our new gate! 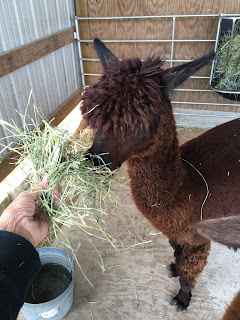 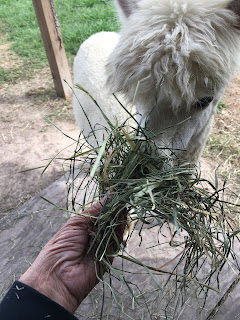 Couldn't close out the year with out showing them munching on their Colorado hay! It has been a big hit and they got special serving on Christmas and New Years! 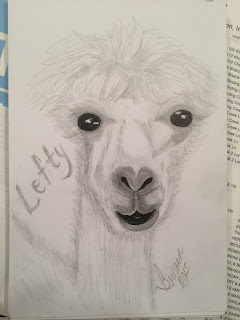 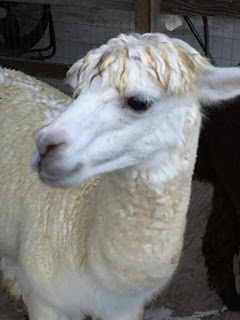 Lefty got a pencil drawing and I think I did pretty good, not sure he would agree. But at least I didn't give him that flat rain do!


The other two got watercolors done during the year; 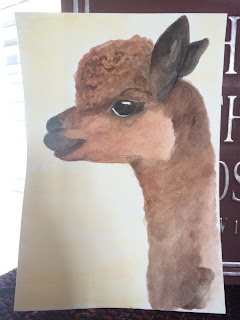 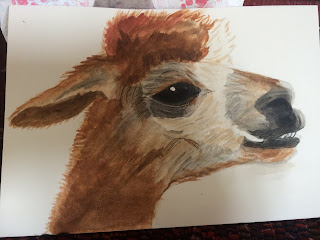 And so with this I'm closing out 2015! I've been practicing with purchased fiber to perfect my spinning before I use their fiber. And speaking of their fiber, it will be heading to a new local mill for processing and prepping it for me to spin. Next year our goal is to have some of the boys yarn and or fiber for sale! Love these guys and it's been a wild ride for the last three years! Can't wait to see what's ahead!

Spring began with shearing and it was done at our place this year. We had the greatest group of young men from ShearingAlpaca.com.  Our team of was headed up by Ben and they did a wonderful job. It was so nice this year to have it done at our farm and not load them up and visit another farm. They were so much calmer and so relieved to have that heavy thick fiber off.

Love is in bloom with me and my boys! It has not been an easy road to this point. They have tolerated me and I've dreamed of the time that they might look at me as something other than the one that feeds us so we must tolerate her, but we don't need to be friendly or nice.

It's really not been that bad but it's finally becoming a respectful relationship and I'm a happy paca momma!

It all started as the weather began to slightly warm up and I decided I would sit in their small pasture before I let them out into the field. I would sit and talk to them whether they paid attention or not, but I soon found they came right over and hung out close - not so close I could touch them, but close.

If I had a few pieces of food they would come closer and eat from my hand and after 30 minutes or so I would open up the gates and let them out. Then I began to leave them in the smaller area while I did my chores - cleaned up poo, scrubbed water buckets and refreshed hay etc. and they hung pretty close watching me work.

And then one day I reached out to try and scratch a back and they let me! I just did it for a few minutes and stopped. At one point or another each of the three have let me scratch backs and necks, but Sam is the one that seems to love it. Last night he leaned into my legs and I leaned back and scratched him for probably 10 minutes - WOW! 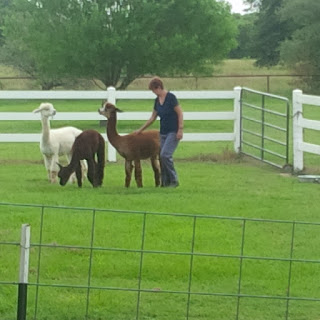 Of course, at this time of the year with the heat hosing their bellies and legs becomes not just a fun gesture of my love, but a necessity and I think that has finally become a sign of my care and they have grown in their trust of me. They run to the hose and greedily get as much as they can ahead of the others.

I am spending much more time with them and they are gifting me with trust and even occasionally
a paca kiss! Of course, Lefty will also try to steal my cap if it's on or maybe taste my hair, but it's done in playful way and makes our time even more fun.

We always fought to get them in their trailer and after we moved it and left the doors open, they have turned it into their "vacation" home! They go in and out of it like it's the greatest of fun and even take naps in it. Who knew they would adjust to it on their own and now I can walk up when they're in it, open and close the doors and they don't seem to mind. 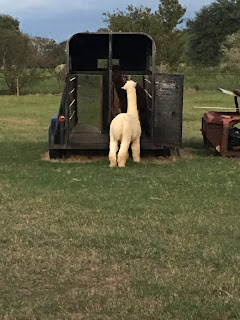 We will take it!

I am determined that I will post more this year and stay up with what's going on in our alpaca life.  They arrived in February 2013 and so a major anniversary is coming up soon.  I keep telling them we will celebrate, but they just look at me like I'm crazy!  Really?  Well, maybe I am!

I post on Bev Ann's Mixed Bag, my other blog, what I'm doing in the crafty world and that includes my spinning and weaving.  But I'm going to share ore of that here to this year, because I wouldn't even be doing it if it wasn't for the boys!  When you shear once a year you get fiber and you can either store it, which I'm finding out is what many alpaca owners do, or you can use it!  You have a choice to send it off to a mill to be processed or you can do it yourself.  If I had 15 or more alpacas there would be no doubt it would be sent off, but I have three so I'm going to attempt to process it myself.

That brings me to the point of this post!  I just spent all day Saturday (January 10) at a seminar sponsored by Rancho Inca Alpacas, Texas Trails Alpacas, Rancho do Santo Domingo and Tejas Alpacas featuring Lynn Snell from Spinderella's Fiber Mill.  What a mind blowing day!  So much information but presented in a most useable way!  Much of what I heard I had heard before, but there's so much to learn about fleece that you really must hear it more than once.  The first time it sounds like you're hearing a foreign language.  The next time it's like you begin to recognize words, but still don't speak it clearly, just understand it a little more.  I have had instructions on skirting fleece, washing it and processing it.  Finally, I think i understand it after this seminar.  We, also, painted yarn (that means dying it in multiple colors), carding it (this is one thing I'm comfortable with) and wet felting.  I'm a needle felted and haven't done much wet felting, but finally it mostly made sense.

I came home Saturday night with a batt I started at the seminar.  I completed the batt and wet felted it into a piece of felt fabric the very next day!  I still have some questions, so signed up for Diana's class for a wet felted scarf (check out Feisty Fenn) at WC Mercantile this next Saturday and then I hope I'm ready to roll on my own.  It's all so much to take in and even with notes and handouts and You Tube there's still so much to learn and there's nothing like hands on!

Since this blog is Jack and the Alpacas and it's mostly about the pacas, I want to start with a cute, cute picture of the boys and Jack! Love that they touch noses through the fence.  Jack got into the pasture once and they didn't even run!  They looked at him, he looked at them and I grabbed him up and took him out of pasture!  Most of the time they are fascinated with him and he just ignores them! 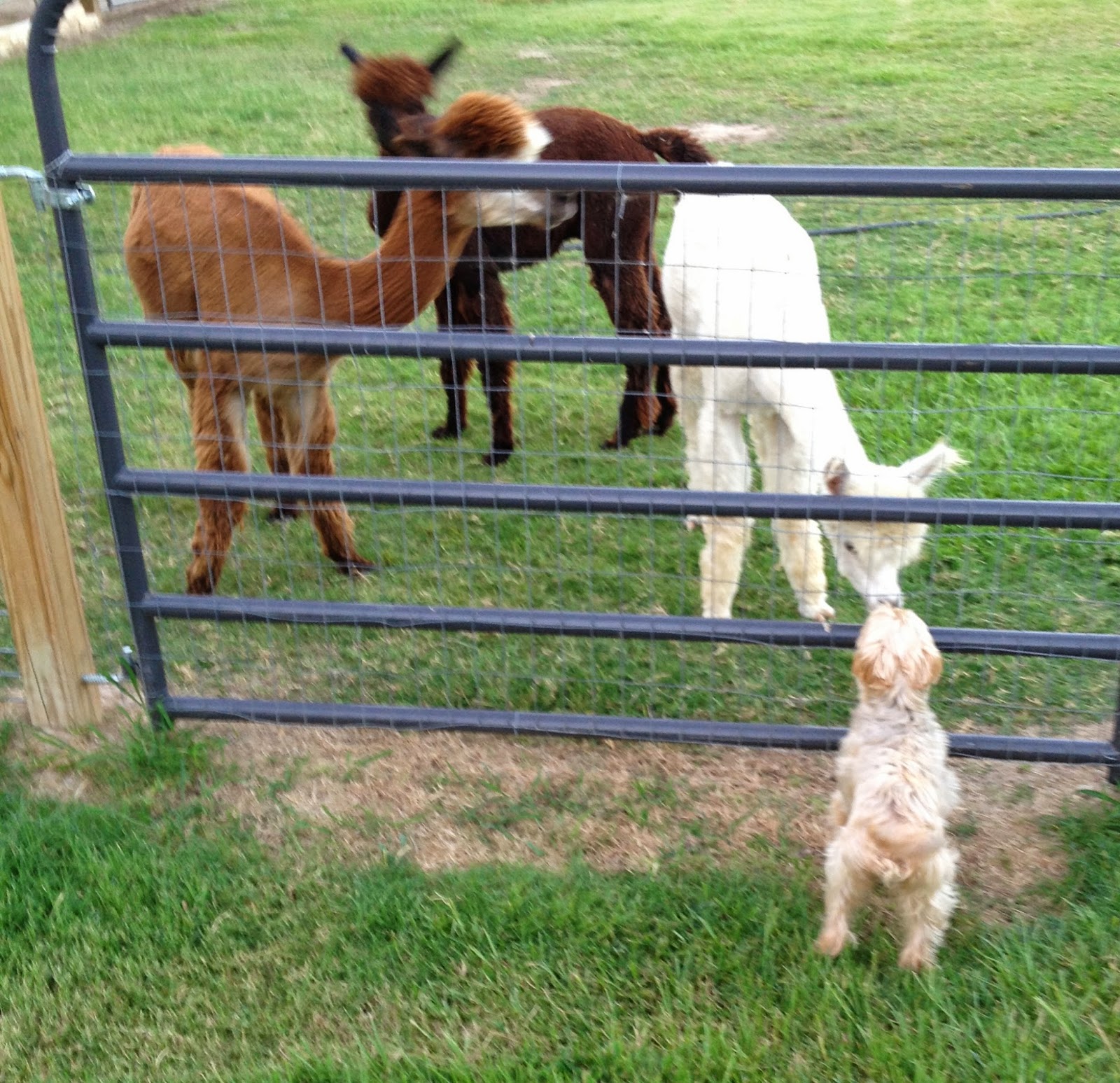 2014 was really uneventful for the boys.  Now that's me speaking, I'm not sure what they would say.  They went for a ride in April and received their annual "haircut" shearing.  And I guess uneventful wasn't really even correct for me - as I took them by myself!  I drove the truck and trailer to the farm where the shearing took place and the boys that are supposed to cush down - that's lay down for us decided to stand and look out the trailer most of the way there.  I pulled off the road twice to make sure they were ok!  Yes, I can be a nervous Nellie! And, of course, it took me and Bill to get them in the trailer in the first place - I didn't want to make it sound like I just walked them in and drove off!  Nope!!!

The second major event for them was their visit from the vet for their annual shots, pedicure and teeth filing!  That's really filing not filling!  No cavities, just teeth that continue to grow!  They actually were pretty well behaved and so they got a second visit later in the year for another pedicure and this time serious teeth trimming as some of them had their "fighting" teeth coming in.  And did you notice we had house calls!  No getting them in the trailer for these appointments - thank you Dr. Lamp. If you are in the Sealy, Bellville, Hempstead area check them out - great with Alpacas.

We had a number of people come visit this year and the boys really seem to enjoy checking them out.  One friend in particular was a little shy around the boys, but they were so sweet with her.  It's almost like they knew she wouldn't try to touch them and so they came right up and sniffed her and ate from a bowl she was holding! Smart boys! 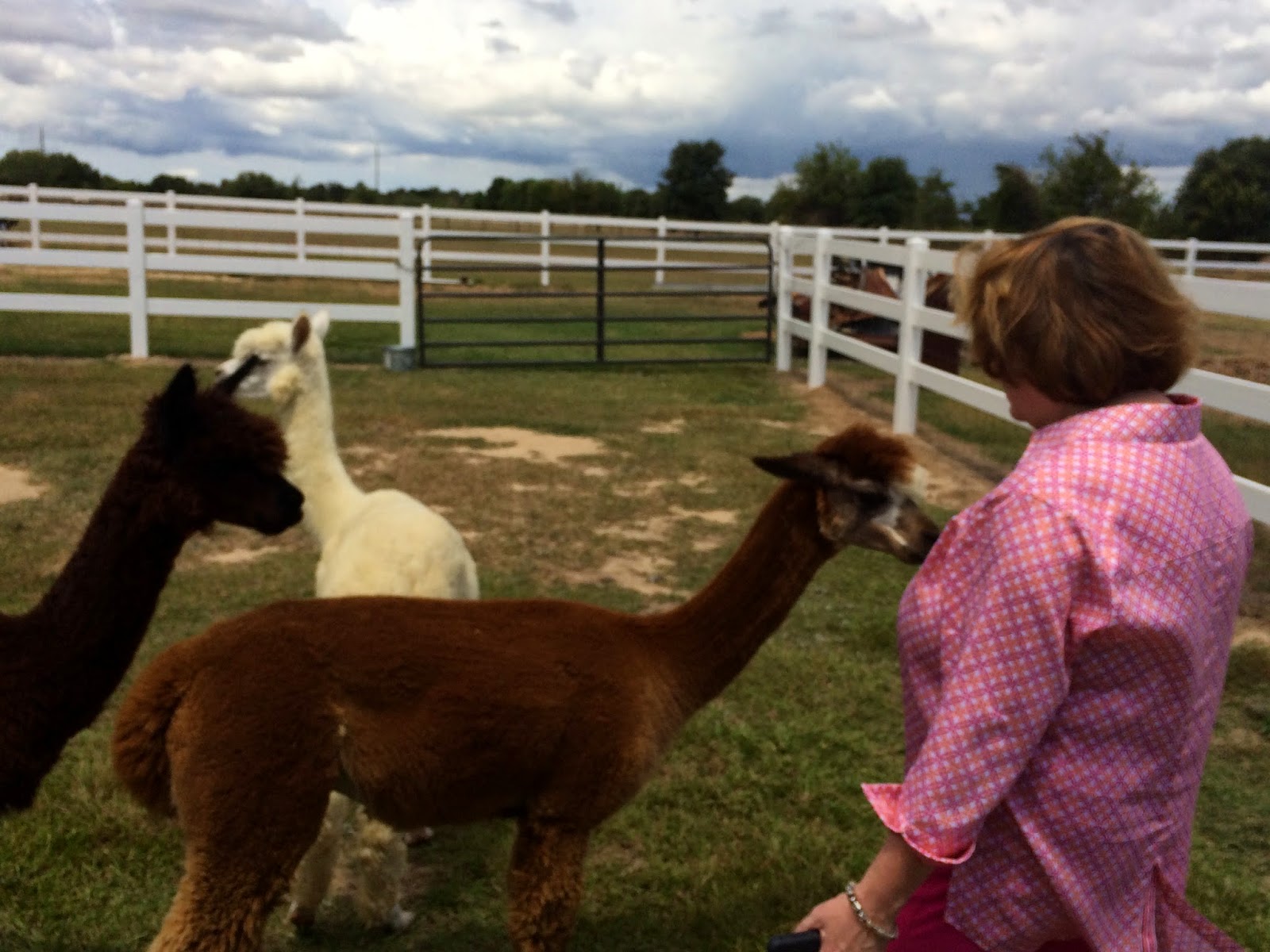 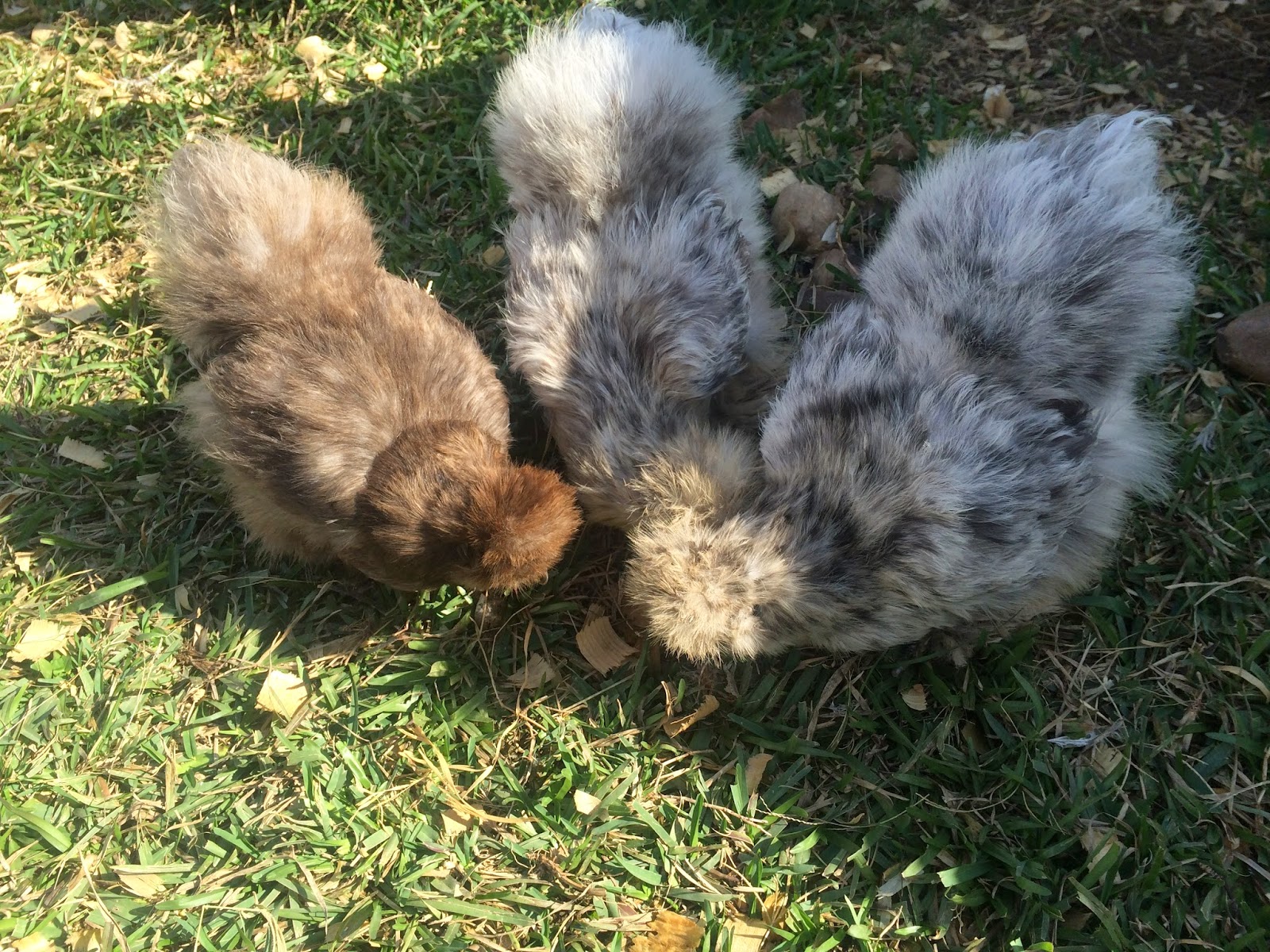 And so the summer passed safely with our crazy heat and you see that they still love the water hose in the summer months.


We are quickly approaching the end of our second year of alpaca ownership - crazy  how time flies when you're having fun!   I have been learning to do many things with their fiber and most of those posts are on  my other blog.  I'm now spinning and weaving!  Still a newbie in all things fiber and alpaca, but I'm learning!  You can check out the creative aspect here!