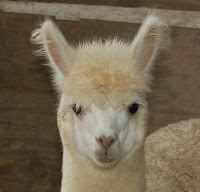 I have been ask why, again!  I can't even count the people who've ask me why I would want an alpaca!  Some of these people have horses and cows, but don't begin to understand alpacas. I guess because I know them and love them, I think everyone does. The next most ask questions is "they spit don't they?"  If they had spent any time around them they would know spitting is not a big issue except with the press!  (Of course, now that I've said that I'll probably get spit on Thursday - ha ha)

As in almost everything today, people, press especially only want to focus on the negatives and I'm really looking forward to educating people on these wonderful, gentle animals.  I guess I was just very blessed to be on the Llama Committee at HLSSR their first year and got to know them.  I love their softness and their sweet faces!  I love that they can be around children, will even let you dress them up in crazy clothes for costume contests and are now being used as caring animals for the elderly at nursing homes.  I love that they will be sheared every Spring and I'll have an abundance of the most wonderful, hypoallergenic fiber in the world!

But honestly, these faces are what it's all about!  Can you really look at these faces and not fall in love?  Maybe, you won't want your own, but I'm betting you will want to come see ours! 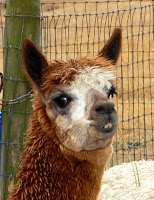 What a weekend!  We have worked our fingers to the bone (slight exaggeration) and we are beat tonight! (no exaggeration!!!!)  We're moving right along with our preparations for the boys to finally come live with us.  Thankfully, we had a wonderful weekend to work outside.  In fact, yesterday I was in a sleeveless shirt and sunscreen!  Yes, it is January, but it's also south Texas and we just never know - winter today - summer tomorrow!

I mowed and used the weed eater all around the back yard, the barn and the new alpaca area.  Yes, you got that right, weed eating and mowing!  For those of you with snow and ice, that is what we have to do to not have snow and ice!  :)

Bill completed the digging of post holes and we got the remaining wooden posts in the ground and cemented in.  We hung two gates and some fencing, along with completion of the stall.  We also moved dirt, cleaned up all around the alpaca area filling holes and checking for noxious weeds!  As I said at the beginning, what a weekend!  On the bright side we ate out last night so no kitchen to clean up and we had a dinner at church tonight so once again, food without clean up!

Thursday I go up to the alpaca ranch and work with the boys on their leashes and see if they will walk with me!  I will take lots of pictures and hope I come home feeling like they are ready to move down soon.  Still planning on the middle of February, but that will be here before we know it.  Excited but nervous!

Be back Friday with lots of pix.

Email ThisBlogThis!Share to TwitterShare to FacebookShare to Pinterest
Labels: alpacas 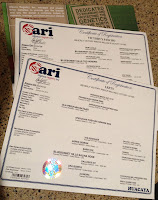 Today, we received Lefty and Pancho's registration certificates in the mail from ari (alpaca registry inc) and we got to see their extensive family tree!  They have a tree that extends from the United States, Chilie, New Zealand, Peru and Canada!  They are quite international and diverse!

Sammy was already registered and we haven't received his transfer yet, but I'm sure he's just as international.  His registered name is much grander than just Sammy!

All three are Huacayas, the fluffy kind of fiber.  There are also Suris whose fiber looks like it's in perpetual dreadlocks.  We preferred the fluffy fiber on and off the hoof! :)


We talked tonight and I think we've definitely decided on the middle of February.  Bill has a trip beginning on 2/3 and so does Laurence, so we'll do the delivery when they're both back in town.  Bill picks up the rest of the fencing tomorrow and we should get it done over the next couple of weeks. He  picked up a wheelbarrow and a shovel today.  Guess how I'll be using those?

I will be going up to the ranch on the 31st to work with them on leash!  I'm told I'll be fine as long as they know I'm in control.  Hope I can be the alpha alpaca, sure have failed being the alpha dog!  We will see!  It's really seeming real now, no longer just abstract and I'm getting really excited.  I might feel differently the first cold, rainy morning when I have to go out and see that they have food before I head off to Bible Study, but like everything there's good and there's not so good, I just bet the good far out weighs the bad!

I'm finding that I look out back and picture them out there grazing and romping (yes they romp) and get even more anxious to have them here.  I think once they get to know us they will come into the area that's visible from the house.  Hope so!  Anyway, enough paca rambling for tonight and so I will end today's journaling!

Be back soon with more of Jack and the pacas!

Welcome to Jack and the Alpacas! This blog is going to chronicle me, Bev Ann, my husband Bill and our very spoiled dog, Jack, as we adventure into the world of alpacas!

For some of you this is the first time you've heard of us, our dog or our alpacas.  For some of you, it's old hat already.  You've been with us as we talked about getting them, picked them out and named them.  For me this blog is a journal recording our adventure with the alpacas from the beginning, through the learning, the loving, the everyday care and the joys of adding these three boys to our family!

Starting at the very beginning!  Our love of (oops, better say, my love) llamas and alpacas began around 1986 when we were on the Livestock Committee with the Houston Livestock Show and Rodeo and the Llama Show first began. I was invited to be on the Committee by Susan Tellez and the love affair began!  I loved their soft fiber, their sweet faces and dreamed of the day I could own one.  Didn't even know then that you can't own just one!  Not like potato chips, this is really true - they're pack animals and you really can't own just one! We lived in the heart of the city and large animals were not allowed, so I worked on the committee and thought it would never be a reality for me.

But, three years ago we moved to the country!  And the dream surfaced once again and we began to look at them seriously a few months ago.  In December we found a wonderful alpaca ranch and the owners Laurence and Donna helped up find the perfect alpacas for us.


Two had not yet been named and so we got to choose the names and settled on Pancho and Lefty! They are both just shy of being a year old.  Our third boy is Sammy and he turned two on January 15. Choosing them was the easy part and just the beginning.

Lefty is the white one (great fiber for dying bright colors), Pancho is the solid brown one on the right (fibers will dye in rich colors
and Sammy is the one with the white face!  Who can resist that toothy grin!!!! Not me, he won my heart with that smile. His fiber will be used naturally or it too will dye in rich dark colors.

As I said choosing them is the easy part! Next comes the fencing, the building of a stable area, preparing the pasture, halter breaking (done by Laurence), learning about food, handling, medical needs, trimming nails, protection and shearing among a number of other things (some known and some not).  Of course, protection is key and that includes from predator animals and poisonous plants!  So much to learn and so much apprehension, but so much excitement, too!

Now the name of our blog is Jack and the Alpacas, so I must mention Jack Daniel Victory, the resident ruler of the house!  Jack will be nine in May and he is King!  We've let him go back to the area we're building for the pacas (abbreviated name) and he's certainly smelled some new smells when we've come home from visiting the boys, but he has no idea what's going to happen to his happy home!  The first time I walk out of his little picket fenced yard and into the pasture with the pacas, he's going to freak out!  That is a given.  He's a mommas boy and he doesn't even like sharing me with Bill, so you can imagine how he will feel when he sees me with the boys as we affectionately call them. We will definitely introduce them slowly and try to make it a smooth transition for everyone.  He doesn't mind our three sheep, but then they don't move! He did thoroughly check them out when they arrived in the yard.


Up at the ranch they have a barn cat and the young pacas in the barn with her don't mind her at all, but out in the field when she followed Donna and me, I watched one of the pacas literally chase her back to the barn, so I'm sure they won't want Jack around them, but we'll see.  They might surprise us - both the pacas and Jack!

We had part of the cross fencing put up a few weeks ago and Bill and I worked on the shelter area this weekend. Looks like Bill is the one really working, guess I was supervising!  Oh, that's right, I was taking the picture for posterity!  LOL

We still have lots to do, so mid-February is probably their move in date. I even mowed the back acre yesterday!  Earliest mowing in my three years - but need to keep down the weeds - don't remember this being in the "introduction to alpacas" book I read!!!!!!

This is going to be a journey for sure, with lots of work, laughs, fun and yet to be determined experiences.  Hope you'll join us on this wild ride!