It really has been  few nights of playing 2013 catch up! Not easy when it's already October of 2014!  But I'm pulling some of the best pictures from 2013 and will finish out the year with a few of my favorites from the alpaca world we've found ourselves in, along with some of my first art yarn pictures and my wonderful spinning wheel - so here we go!

So this wraps up the year!  There were so may other pictures, but I can't post then all.  So when I next post, I will begin to catch up on 2014.  I can only say they are an adventure!  So happy we made the decision and look forward to many good years with the boys!


I just posted the December 2013 post I found in draft!  Now I would like to post about finally using some of their fiber.  Bill announced that he would like to have a scarf made from fiber from all three boys for Christmas!  Yes he told me this in the month of December!  EEK!

I just learned to knit starting in August or September, started spinning in late July and he wanted a scarf!  Well, if it wasn't for my sweet Bill I wouldn't have three alpacas!  I wouldn't have a spinning wheel and I wouldn't have started knitting without these, so it decided I would try to make it happen!

Making a scarf from fiber is quite different than going to the store, buying yarn and knitting it!  Starting from scratch means digging into the bags of fiber, cleaning it and carding it, spinning and plying it, washing it and then knitting!

So here are pictures to explain what I just said!

Mission complete!  To finish out 2013 I'm going to do one more post with various pictures from the year!  It will follow soon - I promise!

Ok - this is crazy, I just found this draft and it was from April 2013!  It had such fun stuff in it about my first fiber show experience that I just have to go ahead and post it now.
Oh, my goodness, tell me it's not true that my last post was February 16th!  Well, that's on this blog - you know I couldn't be quiet for that long.  If you want to catch up on my life, check out Jack and the Alpacas, you'll find the link on the side of this blog.  Anyway, I'm here because I've actually taken a weekend to think of creating and not just caring for animals!

To say the boys have been time consuming is an understatement.  It hasn't just been hands on, in fact, there's been very little hands on!  The boys have not yet learned to like my touching them.  They have grown accustomed to their new home and us and will come up to us, but we better watch our hands and not reach out - off they go running to the far corner!

So for the last two months I have made a couple of cards and a simple little scrapbook for a friend to celebrate her new grand baby.  Other than that, my creative process has been used on fencing and flooring and how to help an alpaca learn to trust me so I can put a halter on.  Put it on them, not me!  Sometimes I think that would be easier - let them lead me around! lol

Anyway, shearing is coming soon and I know these boys will be glad to drop their three - five pounds of fiber and be cooler for the summer.  It's better for us to wait until middle of May, but circumstances this year set the date to April 30.  And believe it or not they had frost on their backs Saturday morning.  Surely that will be the last time this year, but glad they still had their fiber.  I certainly do wander, this is supposed to be about their fiber I'm soon to have in my house instead on the hoof!

This weekend I went to the Yellow Rose Fiber Producers Fiesta in Seguin, TX.  The Bluebonnet Hills Alpaca Ranch where I bought my boys had a booth with their gorgeous fiber for sale and were set up with the wool store W. C Mercantile right beside them.  I bought my first hand carders and got a quick lesson from Katie a remarkable 21 year old "fiber genius".  She's been knitting since 8 and now spins, dyes and teaches how to begin the process.  All this and college too!  She is a wonder.  Of course, I was especially drawn to her as that's my "perfect" granddaughter's name and the same kind of joy!

I was blown away by the array of fiber!  It was like walking into a rainbow and the friendliest people I've ever met at a show of any sort.  Everyone wanted to help me learn, no question went unanswered and I learned so much.  After much walking around and my carding lesson, I went to my class on drop spindle spinning!  It was a small class of about six of us, all of which knitted, except me!  The first thing we were told to do once we had seen the beautiful fiber she brought for us to use and were introduced to the spindle, was to make a slip knot.  For most of you that probably sounds like a simple instruction, but I just sat there with a blank look on my face as five other ladies quickly made their knot and slipped it over the top of the spindle.  I just had to take a deep breath and say, "I'm sorry, but what is a slip knot?"  Heads spun and the woman next for me showed me how.  Not that I remembered later, but she helped the class move along with her help.  No one ask why I wouldn't know how to do that if I was a knitter and if I wasn't a knitter why was I taking this class.

From that point on we were all beginners and I loved the process of spinning with this old and simple method.  I actually made decent single ply yarn.   Our teacher showed us another type of spindle called a Turkish spindle (no idea why it's called that) and it was interesting, but then she said, "You start it with a half hitch!  Well, in my mind that was out of the question - another knot!  No way!

Class ended and I headed over to show my progress to my friends and I saw the "Jeri Brock Woodworks" booth and had just been given a 10% discount on spindles so I stopped.  What beautiful spindles!  All hand made by Jeri of beautiful woods and I knew I had to have one.  So I was preparing to ask about them when my spinning instructor appeared.  She said, "hello and ask if I liked the spindle?"  I said, "They were beautiful" and ask Jeri to help me find what I needed.  Now this is the fun part!  Jeri said, "What type of yarn do you  want as that determines the type of spindle?"  I looked at her with those same blank look I had over the slip knot!  She looked at me and said, "What do you knit?"  I loudly exclaimed, "Oh my, I don't knit!"  I wish you could have seen the look on her face!  Her eyes were wide open with surprise and wonderment and the heads in every booth around us had spun around!  My instructor simply said, "She just got alpacas and is starting the process from the opposite direction than most of us!"  I loved this comment and we had a big laugh and Jeri proceeded to introduce me to the many types of spindles and when she showed me the simple process of making a ball of yarn as you spin with the Turkish spindle I was sold!  She showed me the half hitch knot ( this will be a separate post) and I got my first Turkish spindle.  Jeri hand carves all of her spindles and they are beautiful.  I got one with cutouts of Texas, but it won't be my last and so I will be collecting many of her designs.  She encouraged me to spin for at least 10 minutes every day for seven days and I would be shocked at how much better I would be!

Foot Note October 2014 - Just took two art yarn classes and by the middle of the second one realized that one of the women was my drop spindle teacher at the Seguin Show!  Amazing how things come full circle!  I have not added any drop spindles, but by that August I had added a spinning wheel!  Never really got the hang of the drop spindle, but you will see that I learned to love to spin with my "Country Spinner" wheel.  Art yarn here we come!!!!
Posted by Bev Ann at 8:39 PM

I just started to do a huge catch up post, when I discovered I had written this one in December 2013, saved it as a draft and never hit publish.  I decided it should be posted - after all, late is better than never and I can continue the update from here! So here is last December's post!

Oh my goodness, I just looked at my blog and saw I hadn't posted since July!  This is crazy as I've probably taken a hundred pictures or more since then and soooo much has happened.  Well, that's an exaggeration, but there is some catching up to do.

I think the most important thing is as I said in the last post - the boys are officially ours.  It was this time last year that we picked them out of the herd and chose their names.  We voted on what to name them - would it be Willie and Waylon or Pancho and Lefty as they hadn't been registered.  Pancho and Lefty won.  Sam was was already registered and so no name change could be made.  It is amazing to me that we're quickly creeping up on a year since they moved to our property.  There have been ups and downs, but mostly ups and I'm comfortable now with them being livestock and not house pets! 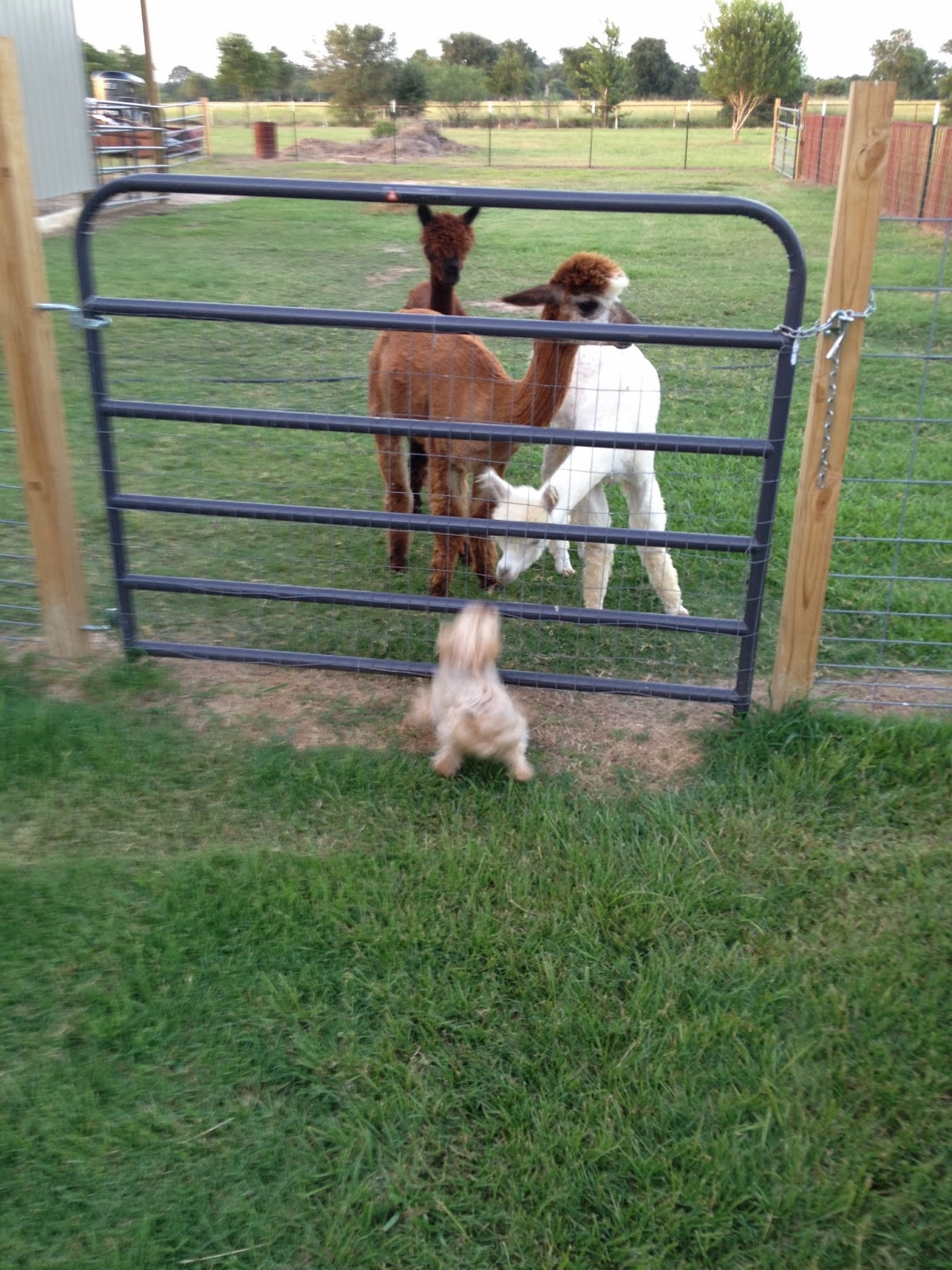 In the summer to help with the  Texas heat we hose them.  It's lots of fun for them and for me.  That's the one time that they don't care how close I get as long as I spray their legs and tummies with water.  Pancho loves to lay down and have me place the hose under his tummy !   They all have very different personalities, but, that doesn't keep them from being the best of buds!  The two younger ones love to run and chase each other and play alpaca games.  Sam is a year older and he runs with them some, but mostly watches them with wonderment!  I realized one night when I was with them that the two of us (Sam and I) were like we were at a tennis match watching them run by following them with our heads back and forth!  I got a big laugh out of it and I almost think Sam did too.

And so we approach the first anniversary much happier on all sides.  We're growing used to each other and our ways.  I put up with them and they put up with me and secretly we love each other!

So to catch up I'm just going to post some pictures taken since July and wish everyone a Happy New Year - I will try to be more faithful with posting next year!

Well, we all know how that promise to post more worked out!  LOL  There will be another post, maybe even tonight that will pick up where this one left off and catch you up with my life with the pacas!